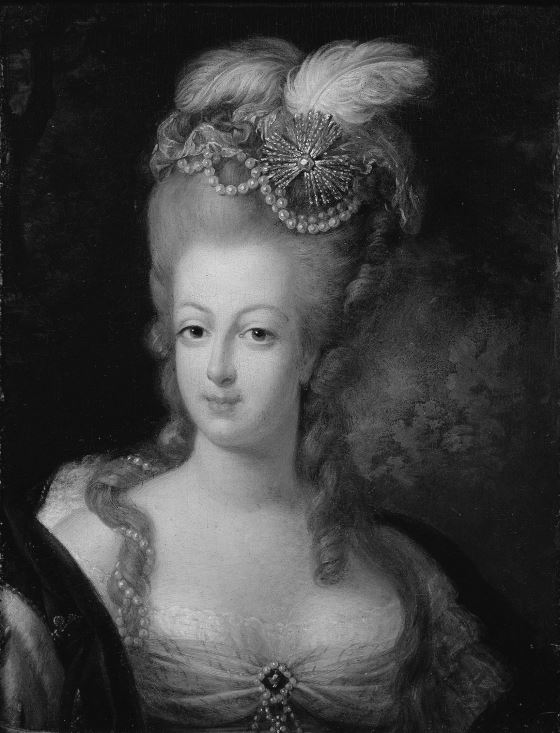 This follows on from “Scottish Privilege” and “£4.50 Doughnuts”, so if you haven’t read them already then go and do so first — else i’ll get really grumpy or something, and you wouldn’t like me when i’m really grumpy.

In English speaking countries there’s an urban myth that during the French revolution someone mentioned to Queen Marie Antoinette that the peasants were starving and she reputedly responded with “Let them eat cake.”

Of course, we love that one in England; anything to diss the French will always cheer us up, no end.   Anyone who thinks frogs and slugs are food seriously needs to try eating some cake instead.

However, in French, her reputed statement was “Qu’ils mangent de la brioche.” which means: “Then let them eat brioche.”   You can read all about the whole episode by clicking here.

If you did click there and read the wiki on it you’ll soon get to thinking that she didn’t actually say it, but that it was a pure propaganda stunt by the peasants to stir up animosity against the royalty.   Or maybe it was just some bored English bloke deciding to have another bash at our favourite neighbours.

Anyways, history lesson over and fast forward to the UK under the bootheels of the Tory party austerity measures.   Are the ruling classes of the UK going to make the same mistake as the French monarchy made and see the peasants rising up against them and chopping their heads off, or are they going to do something different?

Yes, you guessed it, they’re going for a different approach: that of aspiration.

After all, the last thing the poor peasants of the UK need to hear from Mandy Android is this: 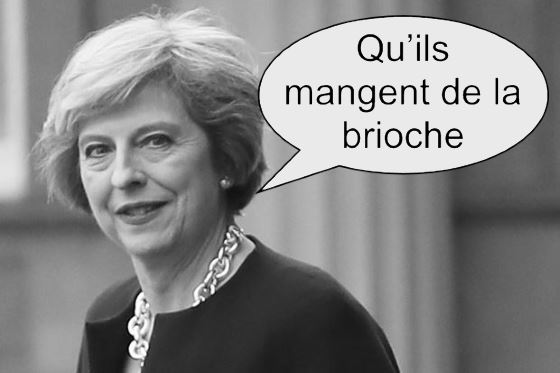 Firstly, the ignorant, mono sylabic, tabloid oiks — which make up the vast majority of the UK population — wouldn’t know what the fuck that meant; and secondly, even if they did manage to translate it correctly, they wouldn’t be too impressed anyway as they don’t know what a brioche is — coz mcdonalds don’t sell ’em, init.

But they eat doughnuts.   Everyone likes doughnuts, especially the poor, downtrodden masses of the UK.   I checked while in Tesco yesterday and they’re still 79p for 5 from the in store bakery.   Probably cheaper at Lidl and Aldi, but i’m way too classy to be seen in those type of places with the sort that frequent them.

So instead of the government handing out barrow fulls of Brioche to the hungry masses, or simply giving them enough benefits to afford to buy their own brioche, they have deliberately fucked up their benefit payments and created a country where the poorest have to sit at home staring forlornly at their 68″ plasma tv screens while watching rich cunts shoving £4.50 doughnuts into their faces while they have to rely on whatever tinned and packet shite the food bank gave them yesterday.

Obviously, this is far better for the peasants than simply giving them brioche as Marie may, or may not have, suggested.

Why is it far better, you may ask?

Well, because it gives the peasants something to aspire to.   Think about it.   What else, other than their 68″ plasma TV screens and 12 hours of day time TV, do these people have to look forward to every day?   If you dangle the carrot of aspiration in front of them, of being just like Judy and getting to go to London to buy £4.50 doughnuts, then they’ll soon be getting off their arses, getting really good jobs and jumping on trains every weekend to get at those doughnuts.

It just makes so much sense.   It certainly worked for Margaret Thatcher who used ‘buy-your-own-council-house’ as her carrot of aspiration for the oiks, which got them all out from in front of their TV’s and getting jobs so that they could get a mortgage and be slaves to their jobs until their mortgages were paid off because they’d now be homeless if they didn’t pay the mortgage.

The oiks didn’t seem to concern themselves with the fact that they could have continued living a job free lifestyle, watching day time TV and been guaranteed to be able to live in their council house for the rest of their lives if they didn’t buy it because housing benefit would always cover the rent.   No, they chased that carrot of aspiration all the way into corporate slavery and worked themselves into an early grave and their houses were sold to the highest bidder to pay for their old people’s home care bill.   The highest bidder being a buy-to-let property magnet who now rents those houses back to poor people on short term 6 month leases at 5 times the rent the original council house would currently be rented to them for if it were still a council house.

So yeah, aspiration.   Do you dream of being wealthy enough, or even pretending to be wealthy enough, to buy £4.50 doughnuts?   If you’ve already bought your own council house then maybe this is the next aspirational step for you.   In the meanwhile it’ll keep the masses downtrodden as they drool at the thought of getting one of those doughnuts one day instead of rising up and overthrowing those that keep them downtrodden and eating slightly stale, food bank doughnuts instead.

Seriously, people, quit aspiring to the shit they advertise to you in product placements within Judy Murray stories that aren’t worth publishing.   It’s all designed to keep you enslaved to the system.   If Marie had known then what the ruling classes of France know now then she would have opened a few tourists shops at the Palace of Versailles and offered expensive tat to the peasants to give them something to aspire to affording — which is exactly what the French government are doing at the Palace of Versailles right now.

Instead of tearing down the gates of Versailles, storming the palace, stuffing your face in the kitchens and nicking whatever valuables you could fit in your pockets; you can now aspire to buy a ticket — starting at 20 euros — to walk through open gates, wander around anywhere you’ve got a ticket for (look but don’t touch), pay a load more euro to eat brioche and drink coffee in the cafe and then spend even more euros buying a shit load of tourist tat on your way out.   Which doesn’t leave much change from 200 euros for a peasant family.   But at least you won’t have to put up with Judy Murray as they don’t take Scottish play money.

Anyway, fuck aspiring to pay for it, revolution was much more fun and much more cheaper.   Storm the doors of the boutique doughnut shops and help yourselves — the police won’t stop you as they’re too busy with all the climate change demonstrations.