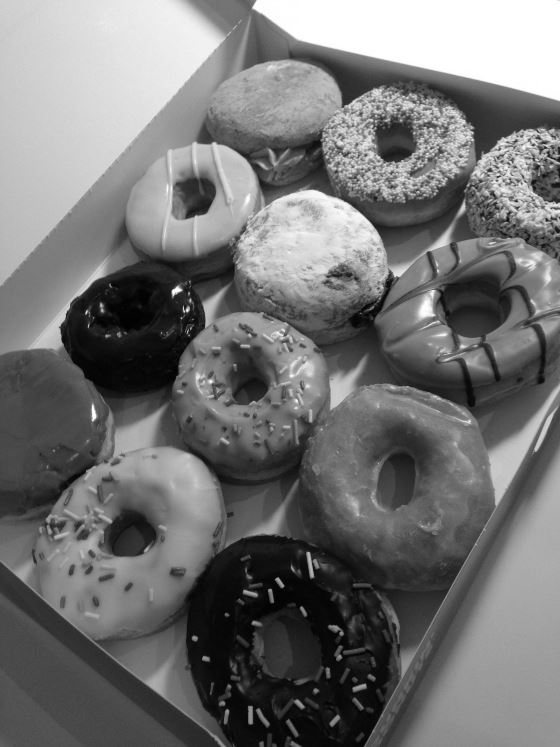 After my previous post on ‘Sottish Privilege’ in which i have a little rant about Judy ‘my-son-can-bat-a-ball-better-than-your-son-can’ Murray and her obscene financial excesses, i decided to dig a little deeper into what makes a doughnut cost £4.50.

So apparently, what makes these doughnuts so fucking special is that they’re made in Reading.

They make them in Reading, fresh every day, and then ship them into London through all that poluted traffic, adding to the already overloaded congestion and pollution that London suffers from while delivering these daily to their 10 London shops, so you can have a super fresh doughnut experience.

I presume that they don’t do this because there’s anything special about Reading — trust me, i’ve watched ‘Beautiful People’ — but because its cheaper to make them there and then ship them into their 10 London shops than it is to make them truly fresh in their shops in London.

Surely, at £4.50, you’d expect someone to stand in front of you and make it especially for you from 100% organic certified ingredients that have been lovingly fertilised with unicorn shit and pixie wee and watered with rainbow tears, but no, you just get a doughnut made in Reading sometime last night from ingredients that i can’t find published anywhere on their website.

One would think that if they were truly proud of their obscenely expensive boutique doughnuts they’d publish a full ingredient list on their website, but no, they don’t even state what kind of oil they use other than its some kind of vegetable.

But, not to worry, if you want to save some money you can buy a box of 6 for £24.   Yeah, it’s actually really real, me and Judy ain’t making this shit up.   They’ve got 10 shops in London, so one can only presume that there’s plenty of people, fucked in the head enough, to be buying them.   Although, when you think about it, all that pollution from delivery vans delivering to 10 different shops every day in London does have most people fucked in the head enough to be paying £4.50 for one single doughnut.

So, anyway, i thought i’d look at Tesco and see what they can do for £4.50 in the way of nice cakey things…   So, for £4.50, at Tesco, i can get 990g of mini gingerbread men, that’s basically a whole kilogram (let’s not quibble over 10g).   Yeah, really, a whole fucking army of your very own mini gingerbread men for £4.50.   So Judy and her friend, i’m presuming she was buying two doughnuts to share one with a friend, but maybe she’s just a greedy person and was hoping to devour them both herself.   After all, who the fuck am i to be judging the feeding habits of a nation who eat deep fried, battered pizzas with chips as a snack…

So, if, and it is a big if, we presume one of her £4.50 doughnuts was for a friend, then Judy and her imaginary friend could have, instead, gone to Tesco and got a whole army of mini gingerbread men each and played Warhammer with them and when you killed your opponents you’d get to eat them too — now that’d be so much more fun than 2 fancy, made in Reading, doughnuts.

Tesco in store bakery also sells doughnuts fresh baked every day, ‘in store’ — not shipped half way across England — @ 79p for 5.   Yes, a whole pack of 5 fresh baked doughnuts for 79p.   So you can have 28 1/2 doughnuts for £4.50.   So Judy, and her maybe imaginary friend, could have had 57 doughnuts between them and had such a mental sugar rush that a big fight (that Conor McGregor would have been proud of) in the middle of the street would have ensued over who got the last one — now that would have been headline news worthy of any tabloid and even possibly made the BBC front page.

Moving on: for other sources of cheap doughnuts, simply pop along to your local food bank and wait until someone donates a packet of doughnuts and you’ll get them for nothing.   And if you’re really lucky, they’ll be from some rich, Scotch cunt who paid £4.50 each for two and couldn’t manage the second one after their Pizza Crunch breakfast so decided to give it away to the peasants.

There should be a [sic] somewhere in the previous sentence, but i didn’t put it in because i felt it destroyed the flow of the piece, so i’ll leave it to you to think about where it should go.   Answers on a postcard.   And for the fuckwits who can’t make out what i mean by [sic], this whole thing is wasted on you anyway because you obviously suffer from Dunning-Kruger effect, and right about now you’ll be getting all fucking righteous about everything and attempting to engage me in a tedious exchange of emails in the vain hope of educating me out of my ignorance — and stupidity — while all the while not realising it is you, yourself, who is the utter fuckwit here who is so fuckwitted that any attempt at educating you is a total fucking waste of resources and time: that’s what eating pizza crunch suppers does to your brain.

And people call Margaret Thatcher evil — at least she didn’t allow boutique doughnuts on her watch while the oi palloi went hungry.

Fuck it, it’s 7:04 and Tesco has been open for over an hour.   You see the sacrifices i make so that you can have cutting edge journalism with your breakfast?   So, anyway, it’s well past time for their in store bakery to have my 28 1/2 doughnuts and army of mini gingerbread men ready for a dining room table top battle — at least that’s my day sorted and £9 well spent.

And no, i’m most certainly not finished with this topic.   Click here for the next episode.